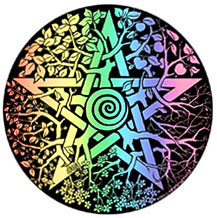 You can find Earth, Water, Air, and Fire as well. The tool meditations: Athame/Sword, Wand, and Cup.

Ground and center. Hold your pentacle in both hands. Breathe deep, and feel the power of the earth, of the body. The pentacle in your own body, four limbs and head. It is the five senses, both inner and outer. Be in touch with your own power to see, to hear, to smell, to taste, to touch. The pentacle is the four elements plus the fifth – essence. And it is the five stages of life, each an aspect of the Goddess:

Look at your pentacle, or draw one on a sheet of paper. Label the five stations going clockwise around the points, and experience each stage in turn, as it occurs in a life span and within the span of each new activity or relationship. Trace the interlocking lines and reflect on their meanings. Love is linked to Birth and Death. Death is linked to Love and Initiation.

In the Goidelic (Gaelic Celts of Ireland, Scotland, and Manx as opposed to those of the Welsh, Cornish, and Bretons.) alphabet, each of the five stages was symbolized by a tree, whose name began with of the five vowels:

Chant the sounds of the vowels and feel the power of each stage in turn. Touch your pentacle to your body, and let the life force of your own flesh flow into it.