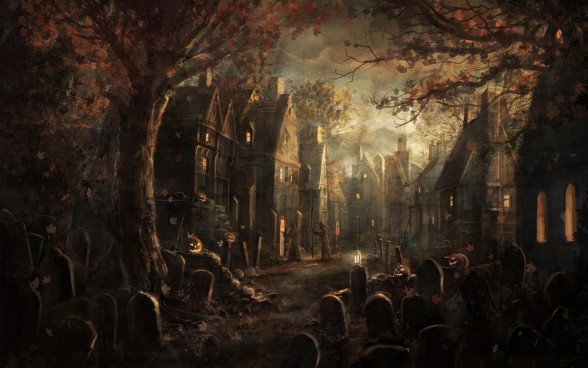 Samhain (pronounced Sow-in or Sah-win) is a Gaelic festival to mark the end of the harvest and to mark the beginning of the “Darker Half” of the year, or Winter. Traditionally, the festival is celebrated from sunset on to October 31st to sunrise November 1st. It falls halfway between the autumn equinox and winter solstice, and is one of four such celebrations that include Imbolc, Beltane, and Lughnasadh. Historically, it has been celebrated throughout Ireland, and later, the Island of Man and Scotland.

As at Beltane, special bonfires were lit. These were deemed to have protective and cleansing powers and there were rituals involving them. Samhain (like Beltane) was seen as an in-between time, when the spirits or fairies (the Aos Sí) could more easily come into our world. It was believed that the Aos Sí needed to be won over to ensure that the people and their livestock survived the winter. Offerings of food and drink were left for them. The souls of the dead were also thought to revisit their homes. Feasts were had, at which the souls of dead kin were beckoned to attend and a place set at the table for them. Mumming and guising (folk plays performed by troupes of actors) were part of the festival, and involved people going door-to-door in costume (or in disguise), often reciting verses in exchange for food. The costumes may have been a way of imitating, or disguising oneself from, the Aos Sí. Divination rituals were also a big part of the festival and often involved nuts and apples. In the late 19th century, Sir John Rhys and Sir James Frazer suggested that it was the “Celtic New Year”, and this view has been repeated by some other scholars. Since the latter 20th century, Celtic neopagans and Wiccans have observed Samhain, or something based on it, as a religious holiday. Neopagans in the Southern Hemisphere often celebrate Samhain at the other end of the year (~30 April – 1 May).

Samhain was one of the four main festivals of the Gaelic calendar, marking the end of the harvest and beginning of winter. Traditionally, Samhain was a time to take stock of the herds and food supplies. Cattle were brought down to the winter pastures after six months in the higher summer pastures. It was also the time to choose which animals would need to be slaughtered for the winter. The slaughter would be followed by feasting. As at Beltane, bonfires were lit on hilltops at Samhain and there were rituals involving them. It is suggested that the fires were a kind of imitative or sympathetic magic – they mimicked the Sun, helping the powers of growth and holding back the decay and darkness of winter. They may also have served to symbolically burn up and destroy all harmful influences. Accounts from the 18th and 19th centuries suggest that the fires (as well as their smoke and ashes) were deemed to have protective and cleansing powers. In Moray, boys asked for bonfire fuel from each house in the village. When the fire was lit, “one after another of the youths laid himself down on the ground as near to the fire as possible so as not to be burned, and in such a position as to let the smoke roll over him. The others ran through the smoke and jumped over him”. When the bonfire burnt down, they scattered the ashes, vying with each other who should scatter them most. Sometimes, two bonfires would be built side by side, and the people – sometimes with their livestock – would walk between them as a cleansing ritual. The bones of slaughtered cattle were said to have been cast upon bonfires.

People also took flames from the bonfire back to their homes. In northeastern Scotland, they carried burning fir around their fields to protect them, and on South Uist they did likewise with burning turf. In some places, people doused their hearth fires on Samhain night. Each family then solemnly re-lit its hearth from the communal bonfire, thus bonding the families of the village together. Dousing the old fire and bringing in the new may have been a way of banishing evil, which was done at New Year festivals in many countries.

The bonfires were also used in divination rituals. In the late 18th century, in Ochtertyre, a ring of stones was laid round the fire to represent each person. Everyone then ran round it with a torch, exulting. In the morning, the stones were examined and if any was mislaid it was said that the person for whom it was set would not live out the year. Divination has likely been a part of the festival since ancient times, and it has survived in some rural areas. Seasonal foods such as apples and nuts were often used in these rituals. Apples were peeled, the peel tossed over the shoulder, and its shape examined to see if it formed the first letter of the future spouse’s name. Nuts were roasted on the hearth and their behaviour interpreted – if the nuts stayed together, so would the couple. Egg whites were dropped in water, and the shapes foretold the number of future children. Children would also chase crows and divine some of these things from the number of birds or the direction they flew.

As noted earlier, Samhain was seen as an in-between time, when spirits or fairies (the aos sí) could more easily come into our world. At Samhain, it was believed that the aos sí needed to be won over to ensure that the people and their livestock survived the harsh winter. As such, offerings of food and drink have traditionally been left for the aos sí. Portions of the crops might also be left in the ground for them. People also took special care not to offend the aos sí and sought to ward-off any who were out to cause mischief. They stayed near to home or, if forced to walk in the darkness, turned their clothing inside-out or carried iron or salt to keep them at bay. The souls of the dead were also thought to revisit their homes. Places were set at the dinner table or by the fire to welcome them. The belief that the souls of the dead return home on one night or day of the year seems to have ancient origins and is found in many cultures throughout the world. However, the souls of thankful kin could return to bestow blessings just as easily as that of a murdered person could return to wreak revenge. Picture of a white mare or Láir Bhán.

Mumming and guising (troupes of people acting in folkloric plays) was a part of Samhain from at least the 16th century and was recorded in parts of Ireland, Scotland, Mann and Wales. It involved people going from house to house in costume (or in disguise), usually reciting songs or verses in exchange for food. In Ireland, costumes were sometimes worn by those who went about before nightfall collecting for a Samhain feast. In parts of southern Ireland during the 19th century, the guisers included a hobby horse known as the Láir Bhán (white mare). A man covered in a white sheet and carrying a decorated horse skull (representing the Láir Bhán) would lead a group of youths, blowing on cow horns, from farm to farm. At each they recited verses, some of which “savoured strongly of paganism”, and the farmer was expected to donate food. If the farmer donated food he could expect good fortune from the ‘Muck Olla’; not doing so would bring misfortune. This is akin to the Mari Lwyd (grey mare) procession in Wales, which takes place at Midwinter. In Wales the white horse is often seen as an omen of death. In some places, young people cross-dressed. In Scotland, young men went house-to-house with masked, veiled, painted or blackened faces, often threatening to do mischief if they were not welcomed. This was common in the 16th century in the Scottish countryside and persisted into the 20th. It is suggested that the blackened faces comes from using the bonfire’s ashes for protection. Elsewhere in Europe, costumes, mumming and hobby horses were part of other yearly festivals. However, in the Celtic-speaking regions they were “particularly appropriate to a night upon which supernatural beings were said to be abroad and could be imitated or warded off by human wanderers”.

Playing pranks at Samhain is recorded in the Scottish Highlands as far back as 1736 and was also common in Ireland, which led to Samhain being nicknamed “Mischief Night” in some parts. Wearing costumes at Halloween spread to England in the 20th century, as did the custom of playing pranks, though there had been mumming at other festivals. At the time of mass transatlantic Irish and Scottish immigration, which popularised Halloween in North America, Halloween in Ireland and Scotland had a strong tradition of guising and pranks. Trick-or-treating may have come from the custom of going door-to-door collecting food for Samhain feasts, fuel for Samhain bonfires and/or offerings for the aos sí. Alternatively, it may have come from the All Saints/All Souls custom of collecting soul cakes. The “traditional illumination for guisers or pranksters abroad on the night in some places was provided by turnips or mangel wurzels, hollowed out to act as lanterns and often carved with grotesque faces to represent spirits or goblins”. They may have also been used to protect oneself from harmful spirits. These were common in parts of Ireland and the Scotland into the 20th century. In the 20th century they spread to other parts of England and became generally known as jack-o’-lanterns.

It’s practiced and celebrated by quite a few Pagans. It’s a time when the veil between our world, and the world of the dead is thinnest. Many communicate with those who have passed. It’s a time to think of reincarnation and the circle of life.

Some activities to celebrate Samhain:

– Create and bake a harvest loaf

– Leave apples or fresh baked bread out for the spirits

– Attend a Day of the Dead festival

– Put a candle in the window for your ancestors or spirits

– Reminisce about those who are no longer with us, tell stories

– Carve a pumpkin and empower it to repel negativity

– Set a place at the table for your ancestors

– Set jack-o’-lanterns at the four quarters