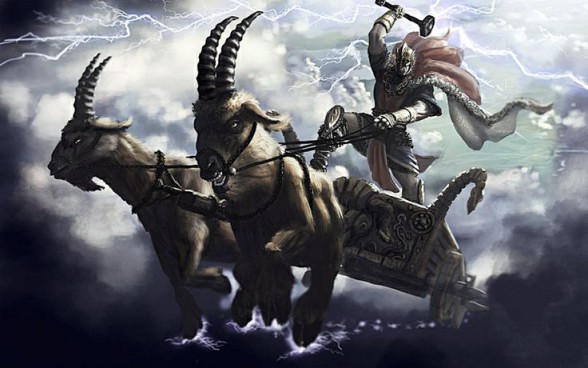 Þorrablót (Pronounced [Thorːaplout]) is an Icelandic midwinter festival, named for the month of Þorri of the historical Icelandic calendar (corresponding to mid January to mid February).

The historical context is from the Orkneyinga saga, where Þorri (“Frost”) is an early Norwegian king, the son of Snær (“Snow”). Hversu Noregr byggðist (“How Norway was settled”, 12th century) states that the Kvens offered a yearly sacrifice to Þorri at mid-winter.

The modern festival arose in the second half of the 19th century, with the Romantic nationalism of the time, comparable to Burns night in Scotland. The first known celebration was reportedly organised by the association of Icelandic students in Copenhagen in 1873, and by other societies active in the Icelandic independence movement of the time (Iceland received a constitution in 1874, and was recognized as a kingdom in personal union with Denmark in 1918).

The Þorrablót is an evening with dinner where participants hold speeches and recite poems, originally to honour the Norse god Thor (Þórr), whose name is taken to be associated with Þorri. Calling the feast a blót (a feast held in honor of a god in Norse paganism) makes clear the reference to pagan times, which many nationalists of the 19th century considered a golden age of Icelandic history. Selection Of Foods For Þorrablót

The festival gained wide publicity in the 1960’s. This was due to a Reykjavík restaurant, called Naustið, starting to offer a platter with a selection of foods that had previously been common in the Icelandic countryside, but had become rare by that time, in 1958. The food was arranged in slices on a wood trough made in the likeness of old troughs on display in the National Museum of Iceland. The restaurant advertised this platter as Þorramatur, thereby linking it with the tradition of the Þorrablót. The idea was well received and the serving of Þorramatur has since become a defining feature of Þorrablót.

Today Þorrablót are common events among Icelanders everywhere and can be anything from an informal dinner with friends and family to large organised events with stage performances and an after-dinner dance. These large Þorrablót celebrations are usually arranged by membership associations, associations of Icelanders living abroad, and as regional festivals in the countryside.

Days: Mid January to Mid February (one day in this time period)

Plants: Winter flowers/plants around at the time

Some activities to celebrate Þorrablót:

– Hold a feast for friends for family

– Honor and celebrate Thor in your ritual or celebration