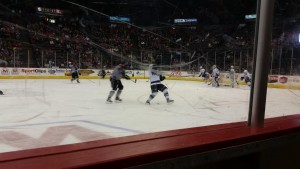 For Webby’s birthday (it was in August but we were in the middle of moving so it kind of got ignored), and Christmas I purchased tickets to a local AAA hockey game. We went and saw the Cincinnati Cyclones! Webby played hockey as a kid. Apparently he was quite the goalie, as was his father in his day. Runs in the blood I suppose. The friend had never been before. I found half of my pleasure just watching those two. They were so excited they sat on the edge of their chair for the greater part of the game. Webby’s face was fair set to split he was smiling so much. The giant soft pretzel he devoured certainly helped. 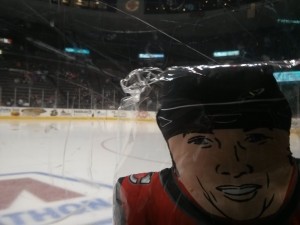 They were giving out these incredibly weird and creepy hockey player plush things. We have three of the things, and I don’t know what to do with them. I’ll have to ask if Webby wants one, otherwise I might offer them to my little cousin. He really like sports. Any sport. So he might like a hockey player he can beat up, tackle, and throw around.

Still off meds, and really starting to feel it. I’ve only been up for two hours, and I’m thinking of crawling back into bed. Webby has to go to bed early tonight (5 pm), so I might crawl in with him, and take a nap.